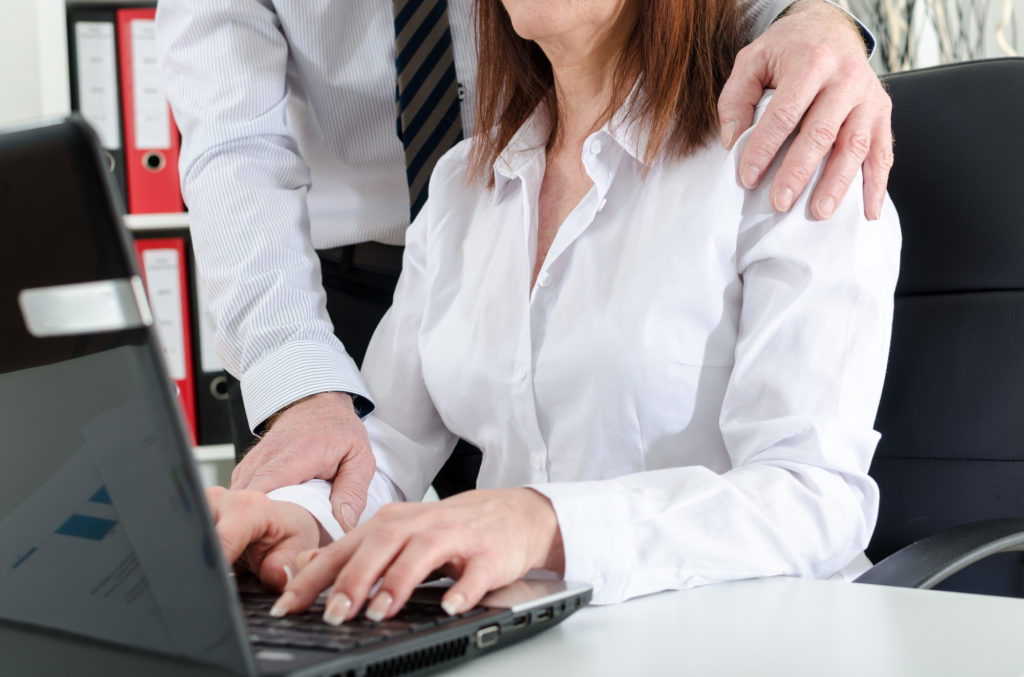 Workplace sexual harassment is extremely trying, confusing and stressful for the victim. Here’s what to do if you are being sexually harassed at work. At least 25% of women have reported that they’ve been sexually harassed at their place of employment.

Unfortunately, that statistic is on the lower end. Disturbingly, it’s estimated that 75% of people who have been sexually harassed have not reported it.

A handful of men have also had this issue in the workplace.

While sexual harassment is illegal and against most company policies, many people let it go unreported. This is because they fear their boss my fire them or retaliate in another way. While this is often the case, it doesn’t mean it’s impossible to report sexual harassment.

In this article, we’ll go over what to do if you are being sexually harassed at work.

What is Sexual Harassment?

First, you should be aware that anyone can be a victim of sexual harassment. Likewise, anyone can be a perpetrator. You’re not protected from either category because of your sex, gender, or sexual orientation.

When you’re hired at a job, most training materials will go over what sexual harassment is. But that doesn’t mean the company will always take steps to stop it.

In a nutshell, sexual harassment is any unwanted comments, remarks or touching that is of a sexual nature.

It can be difficult to tell if you’re being sexually harassed. You may feel as though you’re overreacting or that you can’t take a joke. But, you should always follow your gut feeling.

Sexual harassment isn’t just your employer asking you to sleep with him or her to receive a promotion or raise. While it can be overt in that regard, it doesn’t have to be to qualify as sexual harassment.

In the court of law, anything that would make a reasonable person uncomfortable can be quantified as sexual harassment.

You can also complain about sexual harassment if you witness it. For example, if someone is constantly making vulgar remarks or jokes about women, even they aren’t directed toward you, this can be sexual harassment.

Sexual harassment can also be very subtle. For instance, it can be actionable to tell someone that they cannot do a job or are not eligible for a raise because they are a woman, man, or are gay or lesbian. While most people won’t necessarily sue or turn someone in for these offenses, the courts will still take measures.

Sexual Harassment is Not Always About Sex

This is why sexual harassment often happens in boss-employee relationships. In some cases, it may occur between employees who are at the same level. Likely, though, one is using the harassment to hold power over their colleague.

Fear of Retaliation: What Stops Many People from Reporting

A fear of retaliation stops a large number of people from making complaints. They are often afraid that they’ll be out of a job or get told it’s just part of company culture.

For some people, the fear of losing a job is so great that they’ll keep their mouths shut.

You should, however, be aware that if you fear retaliation, you can and still should report sexual harassment. If retaliation does occur, you can then create further cause for action.

Every company has their own unique company culture. This can include allowing you to wear a t-shirt to work on Mondays or giving you free burritos on Fridays. It can also include a relaxed atmosphere in which colleagues operate as friends and are allowed to be much more relaxed in their office environment.

However, no matter what anyone tells you, sexual harassment is never part of company culture.

If you feel uncomfortable, then you’re likely being harassed or are witnessing someone else getting harassed. Do not let anyone in your company tell you that “joking around” in this manner is part of your company’s culture.

Jokes may be tolerated in some companies, but once they cross the line into a sexual nature, they have become illegal. This is true regardless of the company you work for or their company culture.

Sexual Harassment Can Be Tricky to Prove

Another thing that stops many people from reporting sexual harassment is the fact that it is difficult to prove.

You may find your cubicle mate’s jokes about having sex over the weekend to be in poor taste, but how can you prove he or she said them? At the end of the day, it can be your word against theirs.

This is why you need to report sexual harassment carefully and in a calculated way. Just because you found someone’s joke distasteful doesn’t mean that reporting it alone would hold up in a court of law. That is, unless, the joke was so distasteful that 12 of your co-workers also felt just as uncomfortable with it as you did and also feel compelled to report it.

While sexual harassment can be tricky to prove, it doesn’t mean it’s impossible. Instead, there are steps you should take if you believe you’re being sexually harassed.

What to Do If You Are Being Sexually Harassed at Work

The first thing you should do if you’re being sexually harassed is to document everything. And we mean everything.

Every time the person you’re getting ready to report makes a crude remark or joke, jot down the day and time. You may even want to try and record it on your smartphone for further evidence.

Keep a running list of offenses, so that you can prove there is a pattern and it isn’t just a one-off instance. Often times, there will be witnesses who can corroborate your story.

If you’re sexually harassed in private, you’ll also need to write this down. Private encounters are where bosses or other employees typically tell you they’ll promote you or give you a raise if you participate in sexual favors. In some cases, they’ll threaten to demote you or lower your salary for not participating in these behaviors.

Even though in many cases, there are no witnesses to these events, you should still record them. You should also try and record any of these types of meetings with your smartphone.

While you may be too taken aback to do it the first time, ask the person to discuss the proposition later. Then, go back with your phone ready to record the interaction.

If you have any evidence of unwanted texts or emails, keep these as well, as they’re solid evidence.

After you’ve gathered everything, file a written report with your company. You are required to do so before you can enter into a civil suit against them. They must take the steps necessary in order to ensure their workplace is free of sexual harassment.

In this instance, there may be retaliation against you, as you need to be aware of and prepared for.

If they don’t, you’ll then need to take more drastic measures.

When to Call a Lawyer

If your situation does not change at work after filing a complaint, you’ll need to file a discrimination complaint with the Equal Employment Opportunity Commission. Depending on your state, you’ll have anywhere from 180 to 300 days from the date of the occurrence to file.

At this point, you may hire a lawyer who is experienced in sexual harassment cases. Some employers will have you sign a clause in your contract that states you must attend a private arbitration meeting instead of filing a lawsuit.

They, however, cannot stop you from filing your case with the EEOC. For more information on the legalities of sexual harassment and hiring a lawyer, this website offers assistance.

Sexual harassment is getting talked about more but it’s still a topic many do not like to discuss. That’s why there’s still a cloud of secrecy and confusion hanging over it.

So, “What to do if you are being sexually harassed at work?”

The answer is complex. But with persistence, documentation, and a good lawyer, you can make the law swing in your favor.

For more information on life hacks, tips and tricks, visit our site.

Learning to Cope with Disability: Regain Your Mental Fortitude by Making These 6 Changes in Your Life