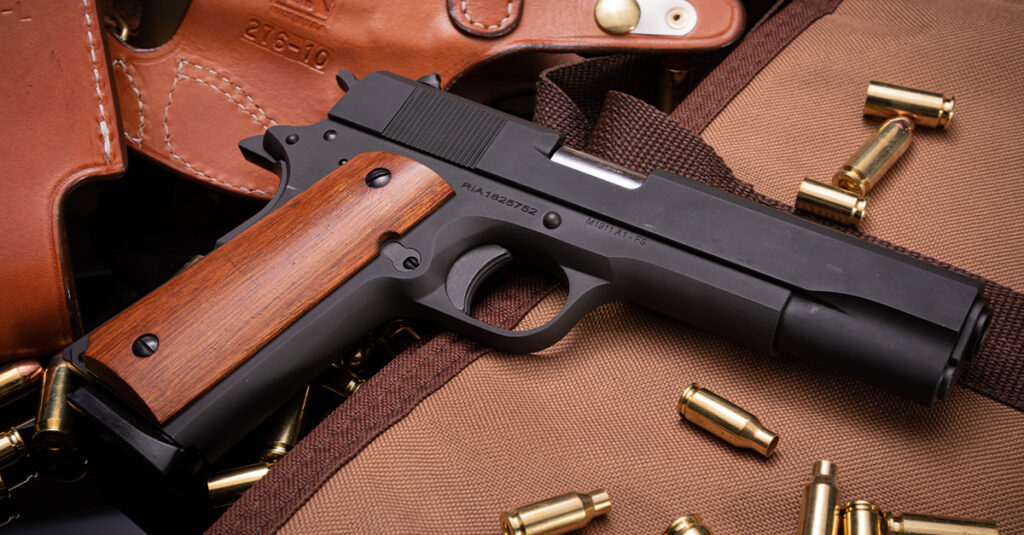 So, you’re ready to go to the range and knock “shooting a gun” off the bucket list. Maybe you bought your first firearm, or the in-laws invited you to a skeet shoot. Surely, you have to make a good impression. Shooting a gun for the first time can be intimidating, or feel dangerous. Here are the rules you need to follow – and the gear you should have – to guarantee your first time behind the trigger is safe, productive, even fun.

First, You need the right equipment.

Guns are hot, loud, and messy. They expel gas and can burn exposed skin on a hot day. And as much as Hollywood likes to embellish how guns work, ricochets are a very real – and very dangerous – thing. That means you need some shooting safety gear. Let’s take a look at what’s required to even step onto most private ranges.

Most ranges won’t even allow you inside without wearing a pair of ballistic glasses. We’re not talking about those shop glasses you might own for the weekend project – those aren’t good enough, here.

Proper ballistic shooting glasses are rated for ricochets: High-velocity rounds that can bounce and return toward the shooter, often nearly at the speed at which they left the barrel. You need to invest in “Z87”- or “MIL-PRF-32432”-rated glasses.

The former (Z87) are the gold standard for civilian eyewear, while the latter are made for military marksmen. Both work and both will protect your eyes from damage at the range.

Hearing protection is also required by most gun ranges. Even if you visit a public range, you must wearing proper hearing protection: Even a single gunshot from a small rifle, like a .22 LR – a rimfire rifle new shooters often practice with – can cause immediate and permanent hearing damage, even tinnitus (a constant ringing in the ears).

But standard ear muffs you might wear while mowing or working on a project won’t typically suffice. That type of light-duty “ear pro” doesn’t provide the type of necessary noise reduction, officially called a Noise Reduction Rating, or NRR.

So, what kind of hearing protection do you need? Your level of decibel reduction needs to be great enough to reduce the volume of gunfire below 120 decibels. Ideally, 110 decibels is the target volume.

That means the average pair of earmuffs can reduce a 140-dB gunshot to around 117 to 124 decibels. That’ll put your ear pro at the safe limit. We recommend doubling up by wearing earmuffs and a pair of ear plugs. This will easily reduce the final volume you experience to at or below 110 dB.

It may be difficult to carry on normal conversation – or more importantly, receive instruction – while wearing hearing protection. So, if you dive fully into the shooting sport, it’s recommended you consider investing in electronic earmuffs. These earmuffs reduce the volume of gunfire while allowing regular noises (like human speech) to pass through built-in speakers in the headset.

Sounds simple, but most new shooters forget – or simply don’t consider – to wear a pair of comfortable tactical gloves while shooting. A proper pair of shooting gloves helps to protect your hands from “slide bite”, a common injury new shooters may experience while learning how to grip a handgun.

Gloves also help to insulate against felt recoil. They can help reduce or eliminate blisters one might suffer while learning to shoot, too. And naturally, new shooters may improperly grasp a firearm that’s hot to the touch, resulting in burns. Yet again, gloves will prevent this.

Before you shoot: The four rules of gun safety.

All four rules must never be broken, lest you wind up making a fatal mistake. Follow these simple rules, though, and you’ll have a great time every time you go shooting. These four rules guarantee safety for you and those around you, no matter the environment:

1. Always point the muzzle of a firearm in a safe direction.

Never point a firearm at something you don’t intend to destroy. Always keep the muzzle of your firearm pointed at the ground, or downrange facing your target.

2. Treat every firearm as if it’s always loaded.

Many firearm deaths that occur annually aren’t caused by violent crime. They often happen because of negligent use. That means a person is handling a loaded firearm in an unsafe manner (see rule #1). And, too often, a user will improperly “clear” a firearm. That means checking to see if it’s unloaded.

Even if you would bet your life that the firearm you’re handling is certainly empty (which you never should), always treat it as if it’s loaded. This redundancy guarantees safety and it instills good shooting discipline.

3. Know your target and what’s behind it.

New shooters tend to focus so much on accuracy, they often neglect to consider what’s behind their target. Even if you’re at a shooting range, always confirm the range is safe before pulling the trigger. That means confirming no one is and nothing is behind the target, except the appropriate backdrop.

While such a situation may never occur at a professional shooting facility or staffed private range, public shooting ranges are often not supervised or staffed. At many public ranges, shooters must personally walk downrange to set up or retrieve a target. It’s always up to you to confirm the direction of your fire is safe for those around you.

4. Keep your finger off the trigger until you’re ready to shoot.

This is perhaps the most common – and derided – mistake new shooters make. It’s a natural and unfortunate habit that shooters often want to rest their finger on the trigger. After all, that’s where it normally resides when you’re locked, loaded, and ready to fire.

But if you’re not actively shooting, always keep your finger off the trigger. It’s a matter of preventing those negligent discharges, and it’s an important safety discipline all shooters should instill in themselves. If every gun owner always exercised this rule, there would be many fewer accidental gun deaths.