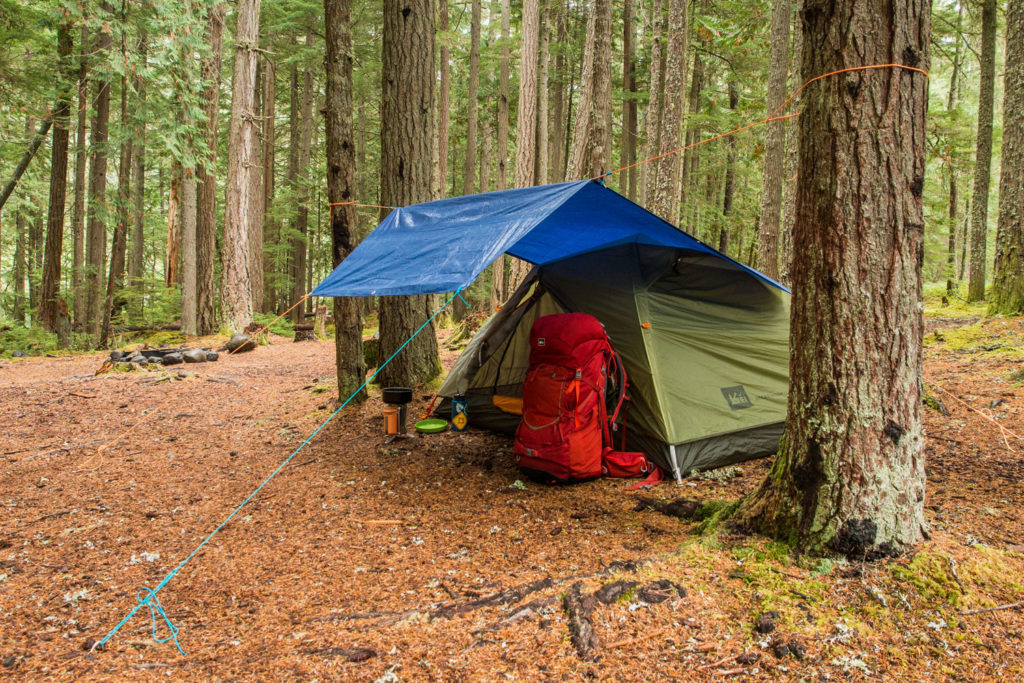 Camping hacks are an essential part of living in the wilderness, even when you’re camping with family over a three-day weekend. Learning to hack your campsite will increase your confidence when things don’t go as planned. Campsites can be hacked using basic equipment like tarps, paracord, and rope. Tarps are perhaps the most versatile piece of equipment you could carry. Tarps are affordable and have an infinite number of uses. Here are nine camping hacks that specifically involve tarps:

When it rains or snows, you can’t build a fire in the open. Constructing a frame to position a tarp above your campfire will help. With a shelter protecting your fire, you can sit next to it and warm up, or cook while watching the snow that would have otherwise sent you running back to your tent.

Just be sure not to use a tarp you care about because the underside will become discolored and full of soot from the fire.

For your safety, never leave a sheltered fire unattended, make sure the tarp is high enough away from the flames, and the structure is stable. Always keep a fire extinguisher nearby.

Wind can ruin your plans for a hot meal by blowing out your campfire. Tie a tarp between some trees to block the wind. Make sure you have several extra tarps on hand in case the wind comes from multiple angles.

Whether you’re camping at an official campsite with picnic tables or improvising with a card table or overturned bucket, tarps make wonderful tablecloths.

If it’s been raining, chances are, your tarp is cleaner (and drier) than the surface you want to put your plate on. Don’t risk dipping your arms in water while you eat. Keep an extra tarp with your camping supplies specifically for use as a tablecloth.

Some manufacturers make survival shelters with specially-fitted tarps, but if you don’t have one, you can use a regular tarp. Turning a tarp into a shelter is easiest when you have tent poles or some kind of structure to place the tarp over. If you don’t have poles, create a shelter by tying a tarp between several trees and staking it to the ground on one side.

Whether you tie a tarp between trees or bury it in the ground, a tarp makes a fantastic tool to catch rainwater.

Some states have laws against catching rainwater, so be sure you’re not breaking any laws.

You’d only need to make an improvised backpack if your regular backpack saw an unfortunate end during your camping adventure. Hopefully you won’t need to make one, but it’s still fun to learn.

Some people buy tents designed to be used as a shower. Other people shower behind tarps tied to trees. If you want privacy but don’t want to spend hundreds of dollars on an official camp shower setup, get a few tarps and designate them as shower curtains.

There’s a reason landscapers use tarps to remove yard clippings and leaves: it’s fast and easy.

Say you come across an area where you’d like to set up camp, but there’s a bunch of debris in the way. How much time do you want to spend kicking away sticks and leaves? Or trying to use a makeshift broom to sweep it far enough away? Use a tarp instead. Put on your gloves, load the debris onto the tarp, fold up the tarp, and haul it away.

When you’re in snow territory, you can’t avoid sledding just because you don’t have a sled. Pull out a tarp and slide down that hill!

Tarps are the most important “extra” in your camping arsenal

Given the number of survival uses for a tarp, it’s probably one of the most important pieces of equipment you can have. Before your next outdoor adventure, add several extra tarps to your arsenal of camping gear. Now that you know what tarps can be used for, you’ll be glad you did.

5 Ways to Get More Followers on Instagram With Paid Ads

Itchiku Kubota’s Collection: How One Man Made the World a Better Place